Self Balancing scooters may not be accepted everywhere after all. In England, the CPS (Crown Prosecutor Service) declares that self balancing scooters, or what many calls hoverboard on 2 wheels are not permitted to be ridden on the public streets and roads.

Popularity of the Self Balancing Scooters Increasing in the UK

The 2 wheel self-balanced boards have become the hot Christmas gift last holidays. It actually made the headlines with rgards to “hoverboards” catching on fire or even exploding. The device was also featured on many talkshows, where people are taking nasty falls by losing their balance while the hoverboard is moving. It was also seen by many celebrities riding them like Justin Bieber or rapper Whiz Khalifa. In Britain, the popularity of these two-wheels board is not a factor.

Origin of the Law

One other reason for 2 wheel balancing boards to be illegal is the fact that they don’t meet the requirements to be registered under either the European or British schemes for road-legal vehicles. On Sunday, police reminded users of the law despite being in effect for a few years already with the old Segway guidance due the increased popularity of the so-called “hoverboard on wheels”.

Simon Benson, the self balancing scooter distributor for Ghetto Gadgets believes the boards being illegal on pavement and public roads will only enhance the popularity of the device.

“If the authorities give any impression that the use of hoverboards in some circumstances is unlawful, then I expect sales to soar, declared Benson to the Guardian.

He added this point with regards to the age of the guidance CPS is using to make it law. “Clearly customers need to take advice, but millennial are not going to take kindly to the authorities using a law that pre-dates the penny-farthing to tell them what they can or can’t do on the streets of Britain”.

With the name “hoverboard” often assigned to the self balancing scooters, these boards stay on the ground with two wheels and don’t hover like you have seen before by Marty McFly in Back to the Future movies.

It is rumored that some real hoverboards are about to be released. One company called Arx Pax is an American version of the hoverboard and with a startup price of $10,000. It is based on a magnetic technology requiring an all-metal surface to be able to hover over and not touch the ground. Needing the all-metal surface will certainly make this product limited in its usage and will be limited to specially prepared private land. This approach raises a new question, if the self balancing scooter is not allowed on streets what about a couple inches above it? That more for the future.
Similar Posts

What is a Self Balancing Scooter
They are known under different names going as far as hoverboard, but many are wondering what is a self balancing...
Read More »

There are no comments yet, add one below.

Find the latest news about self balancing boards. 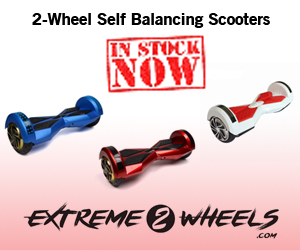